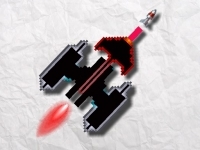 74%
Instructions
How to Play?

Alien Invasion is an online game that you can play on 4J.Com for free. Aliens have invaded the earth and your work is to protect the earth. The universe is your battlefield, and you are attacked from all sides. Attempt to ruin all the aliens and win this war! Alien Invasion is a terrific game which you can play for free in in frvi2.com. With Alien Invasion game, we supply many cool Frvi 2 games to play at no cost.

Use Left Mouse button to move and shoot,