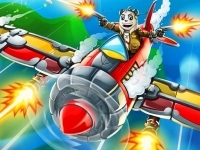 Sky Force is one of the best Air Combat shooting games that everyone can enjoy! Modern arcade game with intense action and vibrant graphics. Control your space fighter through tons of enemies air force in the dogfights. Fight the wicked goblin invaders and beat the boss in air combat! Play Sky Force online at frvi2.com. You can play it in fullscreen to have fun with it. Sky Force is a great Frvi 2 game to play with no cost.

Use Left Mouse button to Play