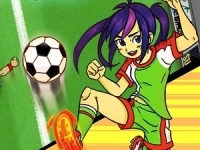 Yuki & Rina are 2 young talented football players. They showed incredible football skills and their coach and manager decided it was time to train them to become Pro Players in the famous “Soccer stars Major Football League”. Before becoming Pro Players, Yûki & Rina must pass the ultimate test, which is a combination of agility, skills and reflex. Here you can play Yuki and Rina Football game and observe its walkthrough at no cost in frvi2.com. Yuki and Rina Football is an wonderful game from our list of Frvi 2 games.